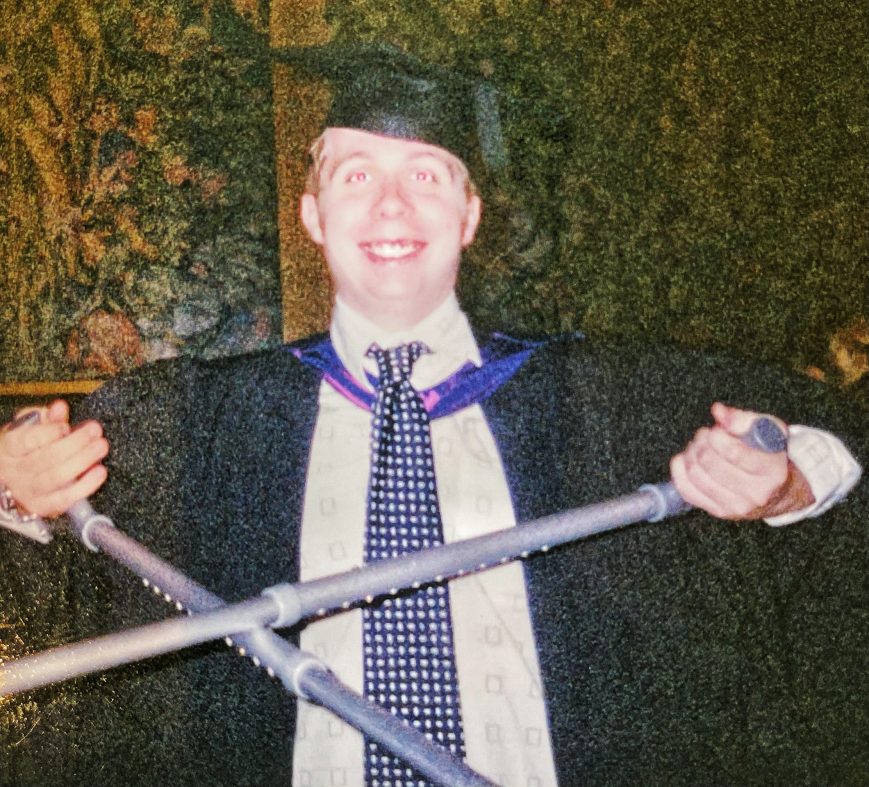 The year was 2004 and I stepped up onto stage at Swansea Guild Hall, ready to shake the Vice Chancellors hand and pose for a photograph with a fake scroll. I was thrilled to be receiving my Law degree and nothing was going to stop me, not even the two crutches I’d been using for the last month after breaking my ankle playing football in Montenegro (at a railway station – long story!). Just after shaking the VC’s hand, I paused for a moment and then pulled out a photograph from my pocket, tearing it in half before stepping off stage. That photograph was the last remnants of a life I was desperate to put behind me. It was the only photo I had from my time spent homeless.

That time had lasted just over half a year, starting a matter of days after Tony Blair became PM to the fanfare of D:Ream’s ‘Things can only get better’. The words certainly seemed apt and they also proved accurate. After stepping to the brink, I was about to start stepping forwards.

I became interested in the Law because at a time of emotional challenge, it provided me with something concrete. Something logical. A set of rules that life should be lived by at a time when little else made sense.

After realising that an LPC wasn’t going to be financially viable, I turned my attention towards another career path – becoming a Chartered Surveyor. They say that whatever doesn’t kill us, only makes us stronger. Well, in my case, moving away from suicidal thoughts as a homeless teenager certainly made me stronger. It taught me the value of having a roof over my head. A short while later, living in a non traditional concrete house (Wimpy no Fines to the property geeks out there) taught me about construction. Years later, living on a Council estate that was being demolished taught me far more still.

Now, in my 40s (only just, I hasten to add!), I’m in a far better place, perhaps with a  few more grey hairs than I should. My career has taken me through from Compulsory Purchase Surveying, to Valuations for Taxation matters, Court compliant reports, Matrimonial asset valuations and a range of other residential valuations and Surveys. One common thread that has run through each of these though is the interaction with sets of legal principles. The law still stands behind me, a welcome shadow as I grapple with exciting challenges.

Chartered Surveyors by our very nature are often quite geeky. We enjoy technical discussions on issues that affect Market Value for instance. What we sometimes don’t do well enough as an industry though is to decipher what the motives of parties in a transaction may have been. They are often resolved by solicitors, giving effect to the parties wishes at an early stage.

It never ceases to astound me, just how intertwined the legal and surveying professions have become. When I started as a Surveyor in 2005, there was a running joke at my place of work between solicitors that a Surveyors input to commercial lease terms would be insisting the word ‘reasonable’ is used a few times. Times have changed though. Our industry’s work far closer together now.

Recently for example, I –

Similarly, colleagues of mine at Websters Surveyors regularly deal with Leasehold reform matters where we’ll advise on a figure to put in a Section 45 notice and will liaise with solicitors about the validity of the Section 42 notice.

For Home Surveys, I’ve enjoyed reading about the Hart v Large case and it’s impact on the market in regards to PCC’s, albeit with a significant degree of concern as well.

As a Chartered Surveyor working in Residential Valuation, I still feel honoured to regularly use that set of guiding principles and rules which make life make sense – the Law. Once upon a time, I’d have referred to myself as a frustrated never-to-be Solicitor, having been unable to follow that initial dream. Now though, I sleep fulfilled, knowing that I get to combine two pillars of interest – the Property world and the Legal one.

I still regularly speak with many solicitors, dealing with transactions and an array of property deals all across London and some surrounding areas. I have the utmost respect for all of the people I work with, some of which I have come to call friends over the years. I’m always open to working with other people as well so if you’re reading this as someone I don’t know, please do reach out and say hello.

Surveyors and Solicitors sometimes end up being stereotyped – put in our own little boxes of what we are like. I’ve done so myself in using the term ‘geeky’ earlier in this article. Property professionals are often in one camp or another. The best of us though have to try and have a foot in both camps. Whilst not stepping into areas outside of our competence, it is so crucially important to understand the direction that someone we work with, might be approaching a position from. Collaboration and understanding is key.

That teenage former self who was homeless is now firmly in the past. I don’t recognise him anymore but I’ve learned from those experiences. As for Tony Blair, well he went onto become a Peace Envoy for a period– go figure! As for D:Ream, does anyone care?

Now, whilst working from home in the middle of a pandemic, I look over to a picture hanging on my wall, of myself holding a degree scroll off in a small room away from the main stage of Swansea Guild Hall. It serves as a constant reminder that if you really want something, you should be prepared to work incredibly hard for it. After all, what the picture doesn’t show is that I was standing on one leg, with my crutches to one side (apologies picture is on the side).